There are many reasons such as noise, cross-talk etc., which may help data to get corrupted during transmission. The upper layers work on some generalized view of network architecture and are not aware of actual hardware data processing. Hence, the upper layers expect error-free transmission between the systems. Most of the applications would not function expectedly if they receive erroneous data. Applications such as voice and video may not be that affected and with some errors they may still function well.

Data-link layer uses some error control mechanism to ensure that frames (data bit streams) are transmitted with certain level of accuracy. But to understand how errors is controlled, it is essential to know what types of errors may occur.

There may be three types of errors:

In a frame, there is only one bit, anywhere though, which is corrupt.

Frame is received with more than one bits in corrupted state. 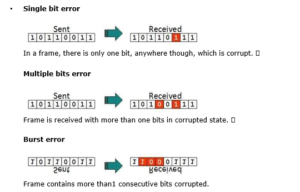 Errors in the received frames are detected by means of Parity Check and Cyclic Redundancy Check (CRC). In both cases, few extra bits are sent along with actual data to confirm that bits received at other end are same as they were sent. If the counter-check at receiver’ end fails, the bits are considered corrupted.

One extra bit is sent along with the original bits to make number of 1s either even in case of even parity, or odd in case of odd parity.

If a single bit flips in transit, the receiver can detect it by counting the number of 1s. But when more than one bits are erroneous, then it is very hard for the receiver to detect the error. 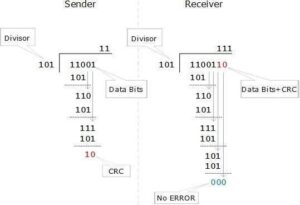 At the other end, the receiver performs division operation on codewords using the same CRC divisor. If the remainder contains all zeros the data bits are accepted, otherwise it is considered as there some data corruption occurred in transit.

In the digital world, error correction can be done in two ways:

To correct the error in data frame, the receiver must know exactly which bit in the frame is corrupted. To locate the bit in error, redundant bits are used as parity bits for error detection.For example, we take ASCII words (7 bits data), then there could be 8 kind of information we need: first seven bits to tell us which bit is error and one more bit to tell that there is no error.

For m data bits, r redundant bits are used. r bits can provide 2r combinations of information. In m+r bit codeword, there is possibility that the r bits themselves may get corrupted. So the number of r bits used must inform about m+r bit locations plus no-error information, i.e. m+r+1.

Data-link layer is responsible for implementation of point-to-point flow and error control mechanism.

When a data frame (Layer-2 data) is sent from one host to another over a single medium, it is required that the sender and receiver should work at the same speed. That is, sender sends at a speed on which the receiver can process and accept the data. What if the speed (hardware/software) of the sender or receiver differs? If sender is sending too fast the receiver may be overloaded, (swamped) and data may be lost.

Two types of mechanisms can be deployed to control the flow:

This flow control mechanism forces the sender after transmitting a data frame to stop and wait until the acknowledgement of the data-frame sent is received. 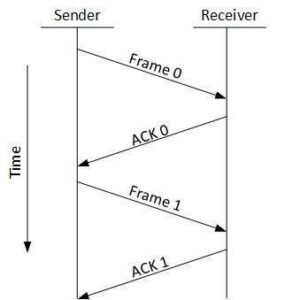 When data-frame is transmitted, there is a probability that data-frame may be lost in the transit or it is received corrupted. In both cases, the receiver does not receive the correct data-frame and sender does not know anything about any loss.In such case, both sender and receiver are equipped with some protocols which helps them to detect transit errors such as loss of data-frame. Hence, either the sender retransmits the data-frame or the receiver may request to resend the previous data-frame.

There are three types of techniques available which Data-link layer may deploy to control the errors by Automatic Repeat Requests (ARQ): 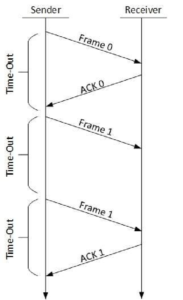 The following transition may occur in Stop-and-Wait ARQ:

Stop and wait ARQ mechanism does not utilize the resources at their best.When the acknowledgement is received, the sender sits idle and does nothing. In Go-Back-N ARQ method, both sender and receiver maintain a window. 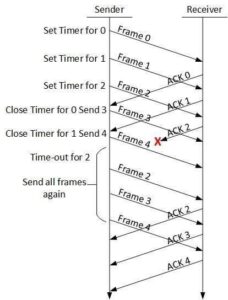 When the sender sends all the frames in window, it checks up to what sequence number it has received positive acknowledgement. If all frames are positively acknowledged, the sender sends next set of frames. If sender finds that it has received NACK or has not receive any ACK for a particular frame, it retransmits all the frames after which it does not receive any positive ACK.

In Go-back-N ARQ, it is assumed that the receiver does not have any buffer space for its window size and has to process each frame as it comes. This enforces the sender to retransmit all the frames which are not acknowledged. 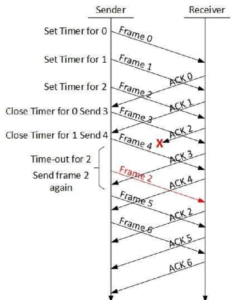 In Selective-Repeat ARQ, the receiver while keeping track of sequence numbers, buffers the frames in memory and sends NACK for only frame which is missing or damaged.

The sender in this case, sends only packet for which NACK is received.

Devices which work on Network Layer mainly focus on routing. Routing may include various tasks aimed to achieve a single goal. These can be:

With its standard functionalities, Layer 3 can provide various features as:

Internet protocol is widely respected and deployed Network Layer protocol which helps to communicate end to end devices over the internet. It comes in two flavors. IPv4 which has ruled the world for decades but now is running out of address space. IPv6 is created to replace IPv4 and hopefully mitigates limitations of IPv4 too.

What is Testing? Testing is the process of evaluating a system or its component(s) with the intent to find whether it satisfies the specified requirements or not. In simple words, testing is executing a system in order to identify any gaps, errors, or missing...

Agile Software Development Although there are many approaches to rapid software development, they share some fundamental characteristics: The processes of specification, design, and implementation are interleaved. There is no detailed system specification, and design...

What is Testing? Testing is the process of evaluating a system or its component(s) with the intent to find whether it satisfies the specified requirements or not. In simple words, testing is executing a system in order to identify any gaps, errors, or missing requirements in contrary to the actual requirements. According to ANSI/IEEE 1059 standard, Testing can be...

Agile Software Development Although there are many approaches to rapid software development, they share some fundamental characteristics: The processes of specification, design, and implementation are interleaved. There is no detailed system specification, and design documentation is minimized or generated automatically by the programming environment used to...