Formal and Informal expressions and words:

You must write a summary of at least 150 words in response to a specific graph (bar, line, or pie graph), table, chart, or procedure on the IELTS Academic test (how something works, how something is done). Few more informal expressions with their formal versions are given below. Since IELTS is a formal test, your writing should be formal as well. Using informal words or expressions should be avoided. Some of the informal words are so frequently used that it would be tough for you to eliminate them from your writing. However, we would suggest you make a habit of using

formal words and expressions instead- for your performance and band score’s sake.

Following are the vocabularies for Academic IELTS Writing Task 1 grouped as Noun, Verb, Adjective, Adverb, and Phrase to help you improve your vocabulary and understanding of the usages of these while describing a graph.

A growth: There was a growth in the earning of the people of the city at the end of the year. An increase: Between noon and evening, there was an increase in the temperature of the coast area and this was probably because of the availability of sunlight at that time.

A rise: A rise of the listener in the morning can be observed from the bar graph. An improvement: The data show that there was an improvement in the traffic condition between 11:00 am till 3:00 pm.

A progress: There was progress in the law and order of the city during the end of the last year.

A surge: From the presented information, it is clear that there was a surge in the number of voters in 1990 compared to the data given for the previous years.

A rapid increase/ a rapid growth/ a rapid improvement: There was a rapid growth in the stock value of the company ABC during December of the last year.

N.B: Following adjectives can be used before the above nouns to show a rapid growth/ increase of something:

A/ The peak: Visitors number reached a peak in 2008 and it exceeded 2 million.

Top/ highest/ maximum: The oil prices reached the top/ highest in 1981 during the war.

N.B: Some of the words to present the highest/ top of something are given below:

A fluctuation: There was a fluctuation in the passenger numbers who used railway transportation during the year 2003 to 2004.

A variation: A variation in the shopping habit of teenagers can be observed from the data. A disparately/ dissimilarity/ an inconsistency: The medicine tested among the rabbits shows an inconsistency of the effect it had. 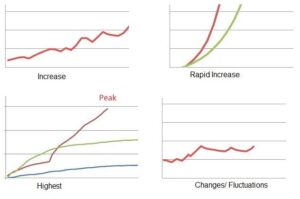 Stability: The data from the line graph show the stability of the price in the retail market from January till June for the given year.

A fall: There was a fall in the price of the energy bulbs in 2010 which was less than $5. A decline: A decline occurred after June and the production reached 200/day for the next three months.

A decrease: After the initial four years, the company’s share price increased, and there was a decrease in the bearish market.

Using ‘Nouns’ and ‘Verbs’ to describe trends in a graph: 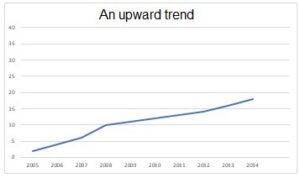 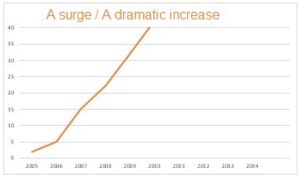 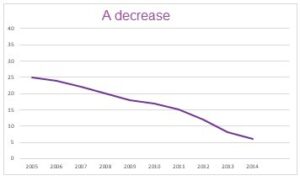 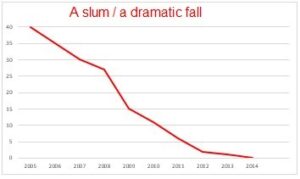 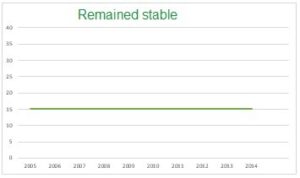 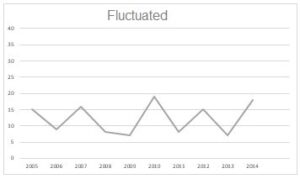 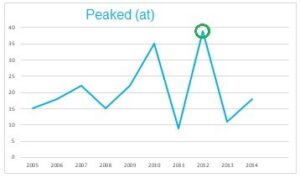 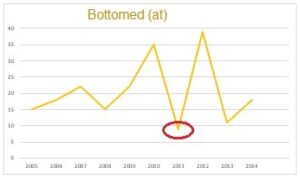 Use ‘adjective/adverb’ to indicate the movement of a trend. Examples:

‘lower’ to compare two percentages or ratios. The following table would make it clear —

Vocabulary to compare to what extent / to (/by) what degree something is greater/higher than the other.

DC - Error Detection & Correction There are many reasons such as noise, cross-talk etc., which may help data to get corrupted during transmission. The upper layers work on some generalized view of network architecture and are not aware of actual hardware data processing. Hence, the upper layers expect error-free transmission between the systems. Most of the...