A programmable peripheral interface is a multiport device. The ports may be programmed in a variety of ways as required by the programmer. The device is very useful for interfacing peripheral devices. The term PIA, Peripheral Interface Adapter is also used by some manufacturer.

The Intel 8255 is a programmable peripheral interface (PPI). It has two versions, i.e. the Intel 8255A and Intel 8255A-5. General descriptions for both are same. There are some differences in their electrical characteristics. Hereafter, they will be referred to as 8255. Its main functions are to interface peripheral devices to the microcomputer.

It has three 8-bit ports, namely Port A, Port B and Port C. The port C has been further divided into two 4-bit ports, port C upper and Port C lower. Thus a total of 4-ports are available, two 8-bit ports and two 4-bit ports. Each port can be programmed either as an input port or an output port.

The Intel 8255 has the following three modes of operation which are selected by software:

Mode 2 -Bidirectional Port: Mode 2 is strobed bidirectional mode of operation. In this mode Port A can be programmed to operate as a bidirectional port. The mode 2 operation is only for Port A. When Port A is programmed in Mode 2, the port B can be used either Mode 1 or Mode 0. 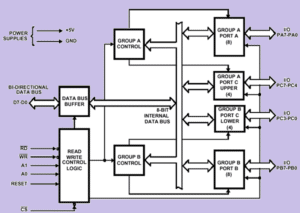 It is a 40 pin I.C. package. It operates on a single 5 Vd.c. supply. Its important characteristics are as follows: 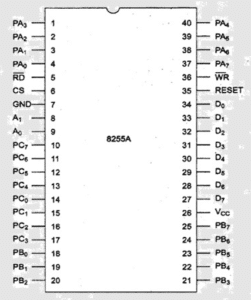 The pins of various ports are as follows:

The important control signals are:

CS (Chip Select): It is a chip select signal. The LOW status of this signal enables communication between the CPU and 8255.

RD (READ): When RD goes LOW the 8255 sends out data or status information to the CPU on the data bus. In other words it allows the CPU to read data from the input port of 8255.

RESET: RESET is an active high signal. It clears the control register and sets all ports in the input mode.

A0 and A1: The selection of input port and control word register is done using A0 and A1 in conjunction with RD and WR. A0 and A1 are normally connected to the least significant bits of the address bus. If two 8255 units are used the addresses of ports are as follows:

Popular programmable interval timer chips are Intel 8253 and 8254. Both are pin to pin compatible and operate in the following six modes:

The 8253 is 24-pin IC and operates at 5 Vd.c.. It contains three independent 16-bit counters. The programmer can program 8253 to operate in any one of the 6 operating modes. It operates under software control. 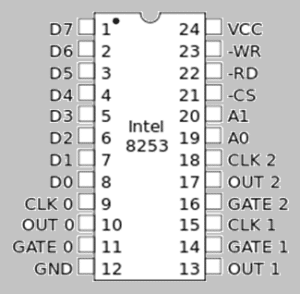 The description of its important pins is as follows:

RD (Read): When this pin is LOW the CPU reads data.

WR: (Write): When this is low, the CPU outputs data in the form of mode information or loading of counters.

A0, A1: These pins are connected to the address bus. These are used to select one of three counters. These are also used to address the control word registers for mode selection.

CLK0, CLK1 and CLK2 are clock for Counter 0, Counter 1 and Counter 2 respectively.

GATE0, GATE1 and GATE2 are gate terminals of Counter 0, Counter 1 and Counter 2 respectively.

OUT0, OUT1 and OUT2 are output terminals of Counter 0, Counter 1 and Counter 2 respectively.

The 8253 contains a data buffer, read/write logic and control word register as described below:

Read/Write logic: The 8253 contains a read/write logic which accepts input from the system bus and then makes control signals for the operation of 8253. The following table displays the status of pins associated with read/write logic for several controls:

Keep it mind, X indicates undefined state. It means that it does not matter whether the state is 0 or 1.